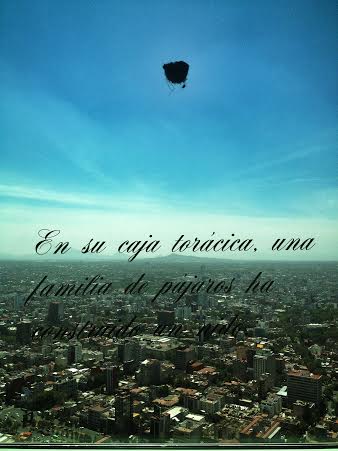 At the Sierra de Guerrero, one of the areas most affected by violence in Mexico, the corpse of a man hanged from a tree had been found and the witnesses told how, inside his chest, a family of birds had built a nest.
This story was told to me by a doctor friend of mine.

That the dead matter of a man, assassinated very probably in a violent way, had been used by a family of birds to be their space of procreation, seemed to me deeply overwhelming and a metaphor of the connection between life and death and of Mexico itself.

Nests may seem safe places, but they are actually very easy to detect for predators allowing them to attack the noisy and defenseless chicks that inhabit them. Thus, when the birds leave the nest, if they manage to survive any possible attack, is just as when the soul leaves the body: it leaves behind an empty and silent witness of a life that no longer exists.

A brutal metaphor, not only of the situation in Mexico, but of how throughout History, despite the violence and even through it, we renew and feed each other cyclically.